Get your free personal copy of Ramadan Strategic Plan 2020.

Are you a Daie or a Leader? Then, this e-book is definitely for you! Make your Ramadan this year a life-changing experience.

Get your free personal copy of Ramadan Strategic Plan 2020.

Are you a Daie or a Leader? Then, this e-book is definitely for you! Make your Ramadan this year a life-changing experience.

In conjunction with Ramadan 2020, we of The Best Fikrah team brings to you the Ramadan for Reviving Civilisation campaign.

Consider a leadership training camp you are specifically chosen to attend. You leave behind your routines and other interests. During this training camp, you have merits to score which value is multiplied greatly.

You have obligatory, difficult tasks to fulfil in order to achieve specific objectives set by the trainer. In addition, voluntary actions that demonstrate your quality will also be rewarded with extra merits. Certainly, the tasks aren’t going to be easy or it won’t be called a training.

By the end of the camp, you should graduate with a certain standard of leadership. There will be a short period — one night to celebrate your success, and then you are sent to the ground to conduct your mission for a longer period.

Ramadan is exactly that. Allah set Ramadan to be a training camp for a Muslim, in particular for you who claim to carry the flag of Da’wah. The Seerah has proven so both for ar-Rasul SAW and the Sahabas where Ramadan was treated as a process of training in Tarbiyyah, Da’wah and Jihad.

As a Daie, will your Ramadan be the same training camp as the common Muslims?

“This day I have perfected for you your religion.” (al-Quran 5:3)

Thanks to all the 23 years of hardships and struggles of ar-Rasul SAW and the Sahabas, Islam in its form as a comprehensive system managed to be practised by the Ummah. Their mission was not a simple reform of tweaking here and there. They have transformed the piecemeal worship into a whole system of Allah’s sovereignty.

Years followed, the civilisation of Islam has expanded around the globe and more people are introduced to the divine way of living. Unfortunately, our own shortcomings had cost us the caliphate empire. It’s not the glory that is lamented here, but the dismay that the adherence of mankind to the way of Allah has ended.

The Muslims around the world today are suffering from the consequences. Take Islamophobia, for example: although Islam is the victim here, the Muslims, nevertheless are painted in the media as if they are the persecutors.

The Muslims around the world today are powerless, persecuted and decimated. Islam is deemed irrelevant to the contemporary world now that materialism and technological ingenuity have become the new idols.

Even worse, Islam has retreated into only individual rituals, thus deviating from what ar-Rasul and the Sahabas had taught us.

Should your Ramadan goal as a Daie only be limited to ‘I want to recite the Quran more’ and ‘I want to offer more Zikr’?

All Daies like you are a treasure, a resource,  for the Ummah today.

You should realise that every second wasted by a Daie is another second of the Ummah suffering. If the Daies and the Muslim Leaders are taking their responsibility for granted, then what hope is left for the Ummah?

If you are doing Da’wah for the sake of teaching the basics of Islam without the mindset of reviving the civilisation of Islam, how would the world be restored to the divine system once again?

It would be so unfortunate if the Daies’ Ramadan is only focused on themselves, just like other Muslims.

The Jannah is not only for the Daies. The entire humanity deserves to be in Jannah as well, or they will question you in the Hereafter.

Now that the Ramadan training camp is coming, you should not let it go to waste. More so since the COVID-19 pandemic is affecting Ramadan around the globe. Your training this year certainly is going to be tougher.

But worry not! We are here to lend you a helping hand. For we are also concerned with the state of the Ummah today, just like you.

Step 1: Download and utilise our Ramadan Strategic Plan. It's free!

It is great to benefit from a well organised Ramadan. No matter what day of Ramadan you are in, it is never too late to have this Ramadan Strategic Plan!

Step 1: Download and utilise our Ramadan Strategic Plan. It's free!

It is great to benefit from a well organised Ramadan. No matter what day of Ramadan you are in, it is never too late to have this Ramadan Strategic Plan!

Kindly like our page to support our effort of Da'wah before downloading this file. 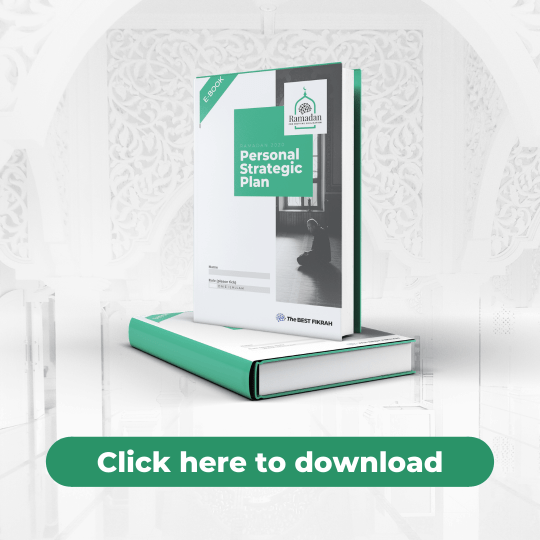 1. You shall be able to make more of your Ramadan this year compared to your previous ones.

2. Our strategic plan promises to suit you better as a Daie or Leader than simply as a common Muslim going through Ramadan.

3. You will Insha Allah graduate from this Ramadan as a more empowered, Ummah-oriented Daie or Leader compared to before.

We’re not bringing you the usual perspectives and lessons of Ramadan.

We’re not bringing you the usual perspectives and lessons of Ramadan.

#EidStory: The Viral Eid Story of IKEA Germany and What It Means for Da’wah

#EidStory: “O Amir al-Mu’minin, can you guarantee me that you’ll live until next month?”

COVID-19 Can Ruin Your Ramadan. Here are 5 Tips so It Won’t.

We are only days away from COVID-19 Ramadan and its related issues. Like it or not, you will have to take a giant leap of change in your daily activities, including how you will be experiencing Ramadan this year. Read More

For the Daie Who Fasts like a Layman During Ramadan.

It is an irony when the fasting Daies — who claim to be the saviours of the ummah and fighters of the Deen — mainly talk and think about achieving Taqwa for themselves. Read More
Load more

If you are wondering why a non-Muslim story is being fitted to our #EidStory, here are some of the reasons and lessons to which you should pay attention. Read More

#EidStory: The Viral Eid Story of IKEA Germany and What It Means for Da’wah

#EidStory: “O Amir al-Mu’minin, can you guarantee me that you’ll live until next month?”

#EidStory: Why Did Ar-Rasul’s Tears Flow During the Day of Eid?

Making This Joyful Eid a More Da’wi One

What makes a great Muslim leader? THE BEST FIKRAH. We enrich Muslim leaders with the right perspectives on Islam and societal issues, with capable leadership.

Start typing to see results or hit ESC to close
Tarbiyyah Da'wah Skill Sets Poster 'Ilm
See all results
Login with ajax is not installed (or active). To use this feature, please install it. Alternatively remove this icon from this location in Zeen > Theme Options.